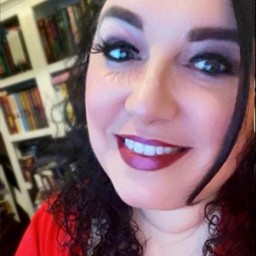 Part of the Paranormal Bureau of Investigation Series World

Other books in the series world to date: Hunted Holiday, Heated Holiday

Finn Mackay stood in the same spot he’d been standing in for the past forty minutes, watching as the spitfire redhead before him read over her holiday buy list once more. From the looks of it, she was Secret Santa to everyone in the office and then some. She should have the damn list memorized by this point, she’d read it enough. “Lass, tell me again why we’re standin’ out in the freezin’ cold waiting in a line for a store I do nae ever shop at?”

“You shop?” Mimi asked, her blue gaze leaving the list.

“Aye, I do nae materialize my clothing,” he returned, his gaze raking over her buttoned-up attire. She was good looking. Shame she had on so much in the way of clothing. Looked as if she was expecting a blizzard.

He’d have preferred she be in a sexy nightie. Hell, he’d prefer all women wear nothing but them. When Mimi had asked him to join her for a night of fun, he’d thought he’d be getting laid. That was his idea of a fun night. He didn’t realize he’d be deemed honorary bag boy and spend a chunk of the night with his balls freezing to his upper thigh. He’d need a chisel, some hot water and possible a bottle of whiskey to help retract them soon enough.

He should have guessed as much with Mimi. She flirted with him but didn’t seem altogether that interested in him. Which baffled him because all women found him charming and irresistible.

Okay. Some just found him annoying and rude, but they’d still fuck him. He didn’t kick too many women out of his bed. Mimi was looker so he’d certainly let her warm his sheets. Too bad her brother would turn him into a road kill with but a click of his fingers.

Damn Fae and their magik. And Conrad was a tool so he’d love the opportunity to use magik on Finn.

“Lass, if I buy you this entire store, can we go home and call it a night?” he asked, serious about the offer. As an immortal, he had more money than he’d ever be able to spend. Seemed worth parting with whatever the store cost just to avoid standing in the cold anymore.

Chicago winters were not kind and this year was an especially brutal one. Though, it wasn’t bundle-to-your-nose kind of brutal, as Mimi had dressed for. He may technically have been dead, but that didn’t mean he enjoyed freezing his ass off. Vampire or not. He liked warmth as much as the next guy. Hell, maybe more.

Mimi huffed. “You whine a lot. I should have demanded Dani come with me, and you and Cornell go to the other store.”

Finn thought about his best friend and wondered if he was enjoying his night more than Finn. Probably. Cornell Sutton was probably making out with his mate—Dani Malloye. All while Finn stood in the subzero temperature with some random man behind him wearing a flannel coat, smelling of deer meat and beer, jabbing him with en elbow at random while making rude comments under his breath.

Wanting the world to go back to what it had been before the mid-seventies. Before the Paranormal Awakening that had brought the supernaturals out of hiding and into the forefront. Finn sort of missed the good old days. When he didn’t have to try to be an upstanding vampire citizen and he just got to eat annoying people in back alleys and blame it on big city crime.

Some humans wanted anything non-human dead—deader than the normal level of dead that came with some supernaturals. The guy behind Finn was one of them. He thought himself original for his dead pun references. Finn had killed men for less in his long life and his fingers itched with the desire to rip the man’s throat out.

“Is it me or does it stink out here?” the fool behind Finn asked. “I think the stiff in front of me is starting to thaw.”

The man only knew Finn was a vampire because he’d overheard Mimi and Finn speaking upon their arrival, when Mimi had made a comment about being happy he’d come just after sunset. The man would have never known had it not been mentioned in casual conversation. For the past thirty minutes, Finn had been plotting ways to end the man’s existence all while Mimi planned the perfect shopping strategy for when the doors opened.

The man pushed Finn again. The demon in Finn reared its head, wanting free to rip the man’s throat out and feast upon his blood. Thankfully, he had a lot of control over his vampire side—unlike many sired ones. He swallowed hard, focusing forward on the people in the pop-tents. They’d been in the front of the line when he and Mimi had arrived just after sunset.

Finn still didn’t see the point of Black Friday shopping. He could have ordered everything on the internet and not had to freeze or try to resist eating humans.

Which seemed harder and harder to do with each passing moment. Finn didn’t love the taste of ignorance but blood was blood and he’d drain the moron of it.

Finn turned slowly, his face an unreadable mask as he leveled his gaze upon the man. A flash of red moved before him and he glanced down to find Mimi there, a hand on one hip and the other hand up near the man’s face—list still in hand.

“Listen, bucko, I’m a girl on a shopping mission. Mess with him again and I’ll use my magik to send your guy parts to Detroit while the rest of you heads to Miami. You want to be relocated in two pieces?”

The man blinked down at Mimi and then swallowed hard. “You’re one of them magiks?”

Finn prepared to kill the man, expecting him to attempt something stupid with Mimi.

Mimi nodded. “I am and right now I’m trying to figure out if I want to hit aisle one or aisle ten first, so you do not want to mess with me. Got it?”

The man glanced at Finn, looking scared. “Got it.”

Mimi faced Finn and smiled. “So, about you shopping. Have you ever considered adding some color to your wardrobe?”

With a grin, Finn tugged Mimi around to stand in front of him, shaking his head at the feisty female. She apparently enjoyed shopping more than most and considered the day after Thanksgiving serious business.